POLYCO Receives Overwhelming Response To Its Request For Project Funding Proposals
May 23, 2014
Winners In The POLYCO Facebook Competition Announced
Dec 04, 2014

Cape Town – POLYCO, the Polyolefin Recycling Company, has released the names of the six successful applicants who will be receiving total investment loans of R7 million over the next 6 months to fund their existing polyolefin recycling operations. The company’s second Request for Proposals was made in July this year, inviting recycling companies to submit proposals for funding that would be used to grow their recycling production volumes and have a direct impact on the sustainable growth of the polyolefin plastics recycling industry. 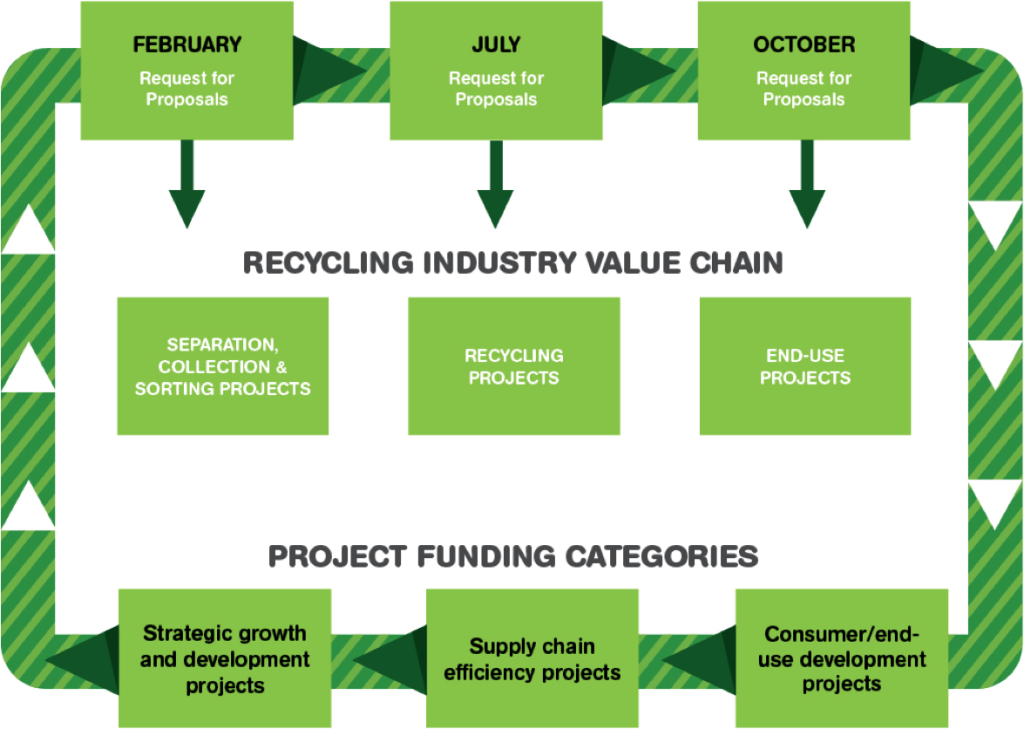 According to Mandy Naudé, Chief Executive Officer of POLYCO, these funds will increase the recycling capacity of plastics bearing the polymer identification codes 2,4 and 5 by almost 8 000 tonnes per annum or 24 000 tonnes in the three year cycle. A major positive for POLYCO, is that this capacity growth is directly linked to an increase in recycled tonnes, as the loans are guaranteed against the applicants’ projected volume growth.

“We received a total of 19 applications for the second round of funding for the 2014 cycle. Of these, we selected the six most suitable applications based on their business plans, financial stability and ability to guarantee waste source to deliver their projected growth,” explains Mandy.

Most of the applications received, were for funding that would address bottlenecking or production constraints in recycling plants. “Several applicants were also looking at upgrading their wash plant facilities as this would improve the cleanliness and quality of their products. Investments in new extrusion, granulation and shredding equipment also featured prominently on the applicants’ business plans,” she says.

The successful applicants are :

Myplas. This Western Cape based recycler is busy addressing the production constraints in his plant in Stikland, Belville. With POLYCO’s assistance, the company will be able to easily unlock additional capacity over the next 6 months. They will be upgrading the wash plant and extruders, which will help the company meet a growing demand for their recyclate – which currently far outstrips their ability to supply.

Italian Plastic Technologies. Based in Gauteng, this recycler of difficult to recycle waste has been in operation for over 17 years. In order to meet the growth in customer demand, they need improved shredding and washing facilities, and POLYCO’s funding will go a long way towards assisting them in achieving this goal.

Mountain View Plastics. Also based in Gauteng, this recycler bought an existing business, which now has old equipment that is unreliable and costly to maintain. Unable to expand and grow without a cash injection, POLYCO’s funding will allow them to take their operation to the next level by acquiring a modern wash plant facility, which is automated and energy efficient.

Polymark Recycling. This recycling facility is in the North West Province and has been operational for the past twenty years. However, the business is currently at a stage where they need to upgrade their washing and drying facilities to take their business to the next stage of development. Partnering with POLYCO will allow them to significantly increase their volumes and produce a higher quality product for their clients on a plant that promotes sustainability, through the use of considerably less water.

EMET. Another Gauteng based recycler, EMET will use POLYCO’s grant to automate and optimise operations, as well as introduce more energy efficient equipment. They will be moving their operation next door to their sister Company, InWaste Green, in Tembisa so as to minimize logistic costs and to streamline operations. This will allow for a significant growth in recycling volumes.

Moiware t/a Coastal Recycling. POLYCO’s funds will be assisting the previously known Collect-All Plastics, to start up again, and to rebuild their business gutted by fire earlier this year. Funding received will go towards an extruder and granulator, so as to be able to assist them to service the East London area, an area that they have dedicatedly serviced for the past 20 years.

Jeremy Mackintosh, the Chairman of POLYCO stated: “The POLYCO Board is very pleased with the volume and quality of the opportunities that are being presented to POLYCO for potential funding support. We can see that by working with the recycling value chain, we can play a role in job creation, enterprise development and in achieving the recycling rate targets as set in the Paper and Packaging Industry Waste Management Plan. We believe that together, we can and will make a difference.”

Concludes Mandy: “It is POLYCO’s goal is to achieve a recycling rate of 35 % (or 239 000 tonnes) recycled out of a total market share of an estimated 680 000 tonnes by 2020. We cannot do it without the help of the collectors and recyclers around the country, who are already making a difference in the communities where they are operational. We extend our sincere congratulations to all the successful applicants and we look forward to seeing each of them grow and prosper, and are privileged to be part of this exciting journey for their businesses”.